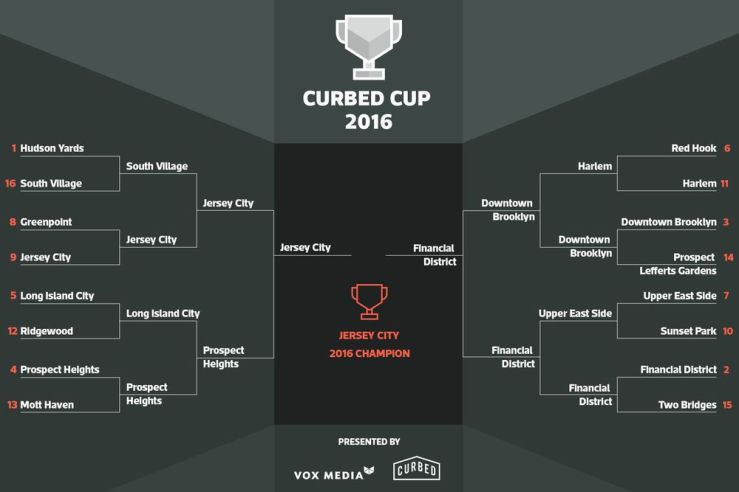 An underdog claims the title yet again

via Curbed.com – It should come as no surprise that an underdog claimed this year’s Curbed Cup; but what is surprising is that, for the first time in the cup’s 13-year run, the auspicious fake award went to a neighborhood—gasp—outside of New York City. That’s right—Jersey City is the 2016 Curbed Cup recipient.

For the past four years, low-seeded neighborhoods have risen to claim the title. Gowanus won the cup in 2015 darting up from the 10th seed, preceded in 2014 by City Island (16) and in 2013 by St. George (15). Each winning neighborhood ascended the ranks in thanks to a concerted community effort including local news coverage and elected official tweets. This year was no exception.

Jersey City mayor Steven Fulop got in on the Curbed Cup action urging JC residents to vote, which led the neighborhood across the Hudson to its stunning victory over the high-seeded Financial District. In the end, Jersey City wallopedthe Manhattan neighborhood, earning 73 percent of the vote.