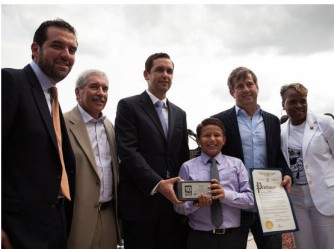 One of the hottest luxury rental buildings in Jersey City, 18 Park, officially opened yesterday evening at a ceremony hosted by developers Ironstate and KRE on the building’s landscaped roof deck.

In front of a small crowd of people in suits and dresses, Jersey City Mayor Steve Fulop lauded the 11-story, 422-unit building’s emergence as an example of “urban revitalization.”

“We are filling these buildings as quickly as we are putting them up,” he said, as servers armed with champagne and hors d’oeuvres sifted through the audience. “This building is an example of everything good that is happening in Jersey City.”

The 18 Park Ave. building with a mostly gray exterior boasts “modern design, exceptional amenities and an ultra-convenient downtown location,” according to a press release distributed at the event.