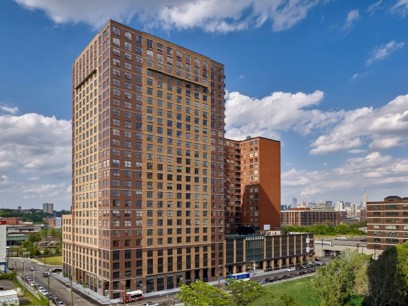 The search was thorough when Terry and Eileen Pritikin decided to not only begin looking for a new home, but also a new care-free lifestyle.  For the past eight years, the empty-nester couple owned a condominium in a full-service high-rise building in Manhattan’s Financial district, but the hassle and burden of homeownership had persuaded the Pritikin’s to transition into a new care-free rental lifestyle.

“After owning eight homes over the years, we were to the point where we wanted to simplify and live a more independent, free lifestyle,” Terry says. “From an investment standpoint, we’d done pretty well with past home sales and thought now was the ideal time to do the same for our current condominium and list it on the market.”

Ready to rid themselves of the constraints of homeownership, the Pritikin’s, who share a home with adult daughter Alicia, left no stone unturned in their apartment search.  They began researching rentals up and down the Hudson River and in the New York metro area both online and in person, initially setting their sights on Long Island City.

“We visited rental buildings such as Avalon Riverview near the East River waterfront and apartments on Center Boulevard,” Eileen recalls.  “The main selling point for Long Island City was proximity to Manhattan.  But I had been living in New York City for more than 15 years and couldn’t believe the expensive rents.  I also wasn’t very impressed by the neighborhood off the waterfront which offered little in terms of retail and services.  After considering all that we would receive regarding price, home and neighborhood, we just didn’t find it appealing enough and decided to shift our focus to New Jersey.”

With their attention turned across the Hudson River, the Pritikin’s covered virtually the entire New Jersey “Gold Coast,” including hotspots such as Edgewater and Hoboken.  However, they were very intrigued with Hudson County’s Jersey City, which is fast emerging as a favorable alternative to apartment seekers looking for a less expensive alternative to Manhattan with the same commutability, culture, dining and entertainment.

One of the first Jersey City stops was Warren at York, a rental apartment located at 120 York Street in the City’s historic Paulus Hook neighborhood.  While it offered the kind of lifestyle the Pritikin’s were seeking, location was once again an issue.

“We decided to give up our car when moving and needed walkability to major shops and services,” Eileen says.   “Unfortunately, the closest supermarket and other stores we’re far away.  What’s more, Alicia works in retail in Manhattan and can keep late hours.  We were slightly concerned about the trip from the Grove St. PATH to the building in the late evening.”

The appeal of Jersey City was still strong and the Pritikins would visit other apartment buildings such as Monaco Towers on Washington Boulevard and Zephyr Lofts on Marin Boulevard, neither of which satisfied their desire for a large home, ease of commute and sense of community.  Their two-month search would thankfully end when the Pritikin’s found Cast Iron Lofts II, an industrial-inspired rental building at 300 Coles Street in Jersey City’s emerging SoHo West (South of Hoboken, West of Manhattan) neighborhood.

“We found Cast Iron Lofts online and originally set up a weekend appointment to tour the building,” says Eileen.  “But inclement weather was coming so Alicia and I decided to visit early.  When we walked into one of the Cast Iron Lofts II apartments, my jaw dropped.”

“I called Terry and told him he had to visit immediately,” she recalls.  “Cast Iron Lofts II was in a different stratosphere than all the other homes.”

“We have a certain lifestyle and have grown accustomed to having a certain amount of room,” adds Terry.  “Cast Iron Lofts II provided a large apartment that’s intelligently laid out. They put an incredible degree of thought into not only in home design, but also to create a high quality, well managed building.”

The Pritikin’s quickly settled on a three-bedroom & den rental at Cast Iron Lofts II.  They moved into their new apartment this May and have quickly found it has exceeded their expectations.

“The interior has high quality condo-like finishes unlike most rental apartments,” added Eileen.  “The building is also perfect for residents such as us who rely on mass transportation and nearby services.  We’re less than a ten minute walk to major outlets such as Target and Acme.  And with Terry and Alicia both working in New York City, the shuttle to the Hoboken PATH station is ideal for commuting.  The community also provides its own SoHo Link transportation service which takes us anywhere we need to travel locally.”

“As Eileen would say, we didn’t want to live in a ‘frat house’ atmosphere,” Terry continues.  “Our New York City building was very family-friendly and we were hoping to duplicate that environment in a new rental home.  Cast Iron Lofts provided a perfect mix of young couples, families and empty-nesters and offers a close-knit, outgoing feeling from the staff to the residents.”

In addition appreciating the homes, building and staff professionalism, the Pritikin’s are also excited about the recreational and social amenities that have officially opened at Cast Iron Lofts II, highlighted by a 17,000 square-foot rooftop deck with sparkling heated pool, pool-side shower, gas BBQ grills, outdoor fire pit lounge areas, and lush landscaping with a shaded tree grove and sitting area.

“The pool is beautiful and they’ve created a system to ensure it’s never overcrowded and remains a relaxing and peaceful amenity,” Eileen says.  “It’s a great outdoor space.”

Cast Iron Lofts II is a 27-story, 232-unit upscale rental building on the border of Jersey City and Hoboken.  Developed by Manhattan Building Company, Cast Iron Lofts II is the second phase of the Cast Iron Collection.  Manhattan Building Company is spearheading the creation of SoHo West into an exciting new neighborhood of rental residences with in highly-amenitized buildings.

Cast Iron Lofts II features expansive studio, one-, two- and a large selection of three-bedroom residences ranging from 885 to 1,885 square feet of living space at monthly rents starting from $2,495.

Cast Iron Lofts II follows the successful lease up of the 155-unit Cast Iron Lofts I apartment building, giving credence to the appeal and market acceptance of Jersey City’s emerging SoHo West neighborhood.  Construction is well underway on the next two-tower building which will include 377 residences.  When completed, the SoHo West development will comprise 2200 residences in multiple buildings and street-level retail space.

An onsite leasing center is now open at Cast Iron Lofts at 837 Jersey Avenue.  For additional information on the rental homes and to schedule a private tour of the furnished model residences and amenity spaces, please call (201) 795-3500 or visit www.castironcollection.com.