A press release from the downtown JC bookstore, Word, just came across our desk and we couldn’t be more excited! Nick Offerman AND Patrick Wilson will be coming to the historic Loew’s theater on Tuesday, April 5th at 8 PM. TICKETS

From the release:  Nick Offerman will read from his hilarious essay collection GUMPTION.  A book signing will follow the discussion.

Purchase tickets early to reserve your spot! Each $20 ticket includes a copy of the paperback version of Gumption. Doors at 7pm and presentation begins promptly at 8:00pm. Purchasing the book below will guarantee entry to the event. Every person attending must pre-purchase a book to attend (no +1’s).

About the book: The star of “Parks and Recreation” and author of the “New York Times” bestseller “Paddle Your Own Canoe” returns with a second book that humorously highlights twenty-one figures from our nation’s history, from her inception to present day Nick’s personal pantheon of great Americans. 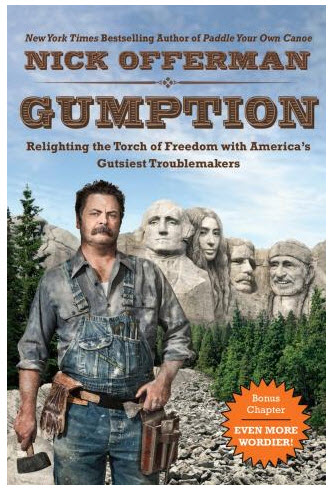 To millions of people, Nick Offerman is America. Both Nick and his character, Ron Swanson, are known for their humor and patriotism in equal measure. After the great success of his autobiography, “Paddle Your Own Canoe,” Offerman now focuses on the lives of those who inspired him. From George Washington to Willie Nelson, he describes twenty-one heroic figures and why they inspire in him such great meaning. He combines both serious history with light-hearted humor comparing, say, Benjamin Franklin’s abstinence from daytime drinking to his own sage refusal to join his construction crew in getting plastered on the way to work. The subject matter also allows Offerman to expound upon his favorite topics, which readers love to hear areas such as religion, politics, woodworking and handcrafting, agriculture, creativity, philosophy, fashion, and, of course, meat.

Nick Offerman was taught to swing a hammer and countless other tools by his Dad, his grandfathers, and his Uncles Dan and Don of Roberts Brothers Farms. In theatre school at the University of Illinois, he used these skills to begin working in the scene shop, under the tutelage of Kenny Egan. This paid off handsomely when Nick began his professional theatre career in Chicago, as he offset his meager acting income with building scenery and props for large equity theaters. By the time he moved to Los Angeles, he’d opened his own modest shop in a warehouse and begun collecting tools. Once in LA, Nick couldn’t find as much scenery work, so he turned to building decks and cabins with his longtime friend Martin McClendon, another Illinois alumnus. Together, they fell under the spell of old-world furniture joinery, and, with Marty’s help, Nick opened his shop soon after, where he continues to build furniture, small boats, and anything else that tickles his fancy.

Patrick Wilson is an acclaimed film, television and stage actor who starred alongside Nick on the second season of Fargo, a role which earned Patrick several award nominations. Patrick is a co-owner of the Jersey City location of WORD and lives in NJ with his family.

Fine print: We are unable to issue refunds, if you can’t attend the event please pick up your signed book from our store within 30 days of the event (by 5/4/16).