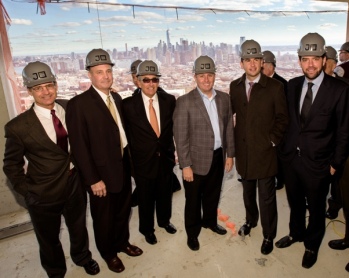 The Developers of Journal Squared join municipal and union officials to celebrate the topping out of the first of three residential towers planned for the property. From left to right: Jeffrey Kanne, President and CEO of National Real Estate Advisors; Dan Gumble, Business Manager of the International Brotherhood of Electrical Workers Local 164; Murray Kushner, Chairman and CEO of The KRE Group; Kevin Verdi, Managing Director of National Real Estate Advisors; Steven Fulop, Mayor of Jersey City; and Jonathan Kushner, President of The KRE Group.

The KRE Group and National Real Estate Advisors have announced the topping out of the first phase of Journal Squared at 563 feet, providing visual context for what will ultimately be a three-tower, mixed-use project that will fuel the revitalization of Jersey City’s historic Journal Square neighborhood and its vital intermodal transportation hub.

“When you look at the Jersey City that has emerged in the last decade, it really is one of the greatest revitalization stories in the country,” Mayor Fulop said. “It is the economic engine of New Jersey, leading the state in both job creation and construction starts, but for a long time Journal Square lagged behind in that progress. Now, for the first time in 45 years, we not only talked about significant development away from the waterfront, we actually got the shovels in the ground. We couldn’t be prouder of the growth and potential of our city that is reflected in this Journal Squared development which will remake the entire skyline.”

The 53-story building will deliver 538 luxury rental residences to a location adjacent to the Journal Square PATH Station. It is part of the developers’ comprehensive, three-phase project that will also include the construction of a 60-story tower and a 70-story building. When completed, the transformative project will bring 1,838 rental residences, 36,000 square feet of retail and restaurant space and a pedestrian-friendly, public plaza to the neighborhood.

Jeff Kanne, President and CEO of National Real Estate Advisors, said: “We’re moving quickly to realize our vision for this game-changing project in Jersey City, which combines vanguard design, unmatched transportation links, and outstanding public amenities. It offers the best of what inspired urban redevelopment must deliver: a highly attractive city environment, convenient lifestyles, and an anchor for future growth.”

The development is creating more than 700 jobs in Jersey City, including construction and eventual full-time employment opportunities.

“We’re delighted to be here today to recognize the combined efforts of our construction and design teams and the many skilled tradespeople who have helped us get to this point,” said Jonathan Kushner, President of The KRE Group. “We believe this iconic project will serve as the centerpiece of a resurgent urban neighborhood by creating much-needed residential, retail and open space that complements the existing mass transportation infrastructure.” 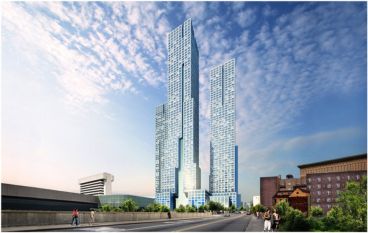 Phase II will include 700 rental residences in a 70-story building, while Phase III will feature 600 rental homes in a 60-story building. A total of 920 parking spaces will also be included in the development. The developers will pursue LEED certification for all three buildings.Scheduled for completion in late-2016, Phase I of Journal Squared will offer 538 studios, one-, two- and three-bedroom rental residences with upscale finishes and appointments and stunning views of the Hudson River, Statue of Liberty, Ellis Island and downtown Manhattan. The building will also feature more than 10,000 square feet of amenities, including a full-service fitness center, golf simulator, children’s playroom and outdoor pool. A one-of-a-kind, 2,000 square-foot entertaining space will be located on the 53rd floor.

Designed in collaboration by HWKN and Handel Architects, Journal Squared will take full advantage of Journal Square’s extensive transportation network highlighted by covered access from the residential lobby to the entrance of the PATH Station which offers rail service to lower and midtown Manhattan, Jersey City, Hoboken and Newark. Approximately 1,200 NJ Transit and private buses also serve the neighborhood on a daily basis, offering residents convenient access to major employment and recreation centers on both sides of the Hudson River without having to depend on their cars.

A significant community element of Journal Squared will be a new public plaza that will be built along the Magnolia Avenue entrance to the PATH station. At the heart of the plaza will be an open space courtyard lined with trees, greenery and seating to encourage pedestrian activity and social interaction. The plaza will also feature a “kiss-and-ride” cul-de-sac for safe and convenient commuter pick-up and drop-off.

Headquartered in Bridgewater, NJ, KRE Group is one of the largest privately held diversified real estate companies in New Jersey. It owns and manages more than 6,000,000 square feet of office, warehouse and retail space. It also has a multi-family portfolio which exceeds 9,000 existing apartments, with an additional 7,000 in various stages of approval and construction. For more information, visit the company’s website atwww.thekregroup.com.