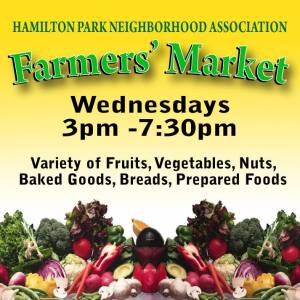 The market runs from the beginning of May until the end of October and provides  residents with fresh fruit & produce, fresh baked goods, frozen meals, pre-cooked meals and a variety of other things.

How to get here via public transit:

Hamilton Park is directly accessible by NJ Transit Bus No. 126 and easily accessible on foot from PATH stations located at Grove Street and Newport (about a 10 minute walk from either).  Two stops along the Hudson-Bergen Light Rail (Newport and Harsimus Cove) are even closer.  Bike friendly neighborhood as well.

About The Hamilton Park Neighborhood Association

The Hamilton Park Neighborhood Association‘s mission is to serve the interests and needs of residents by promoting a cleaner and safer neighborhood, uniting residents in common causes, cooperating with city government, acting as a sounding board for the opinions of residents, representing local residents at city meetings, and serving the interests of the citizenry of downtown Jersey City.