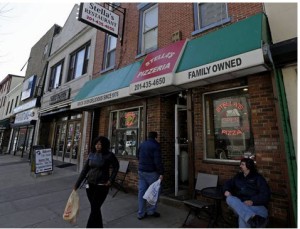 Stella’s restaurant on Grove Street in Jersey City, N.J., has been owned by the Ioakimidis family since 1976. PHOTO: PETER FOLEY FOR THE WALL STREET JOURNAL

Under the new rules, only 30% of commercial space downtown could be rented to a business that has 10 other properties within 300 miles of Jersey City, according to a proposed draft.

Since many of the best-known chain stores and restaurants have many more properties than that, Mr. Fulop is trying to dramatically limit chain businesses.

“Applebee’s isn’t exactly a food destination that attracts people from all over the region,” Mr. Fulop said. He added: “We don’t want every retail space to become a Gap, TGI Fridays or a Starbucks.”