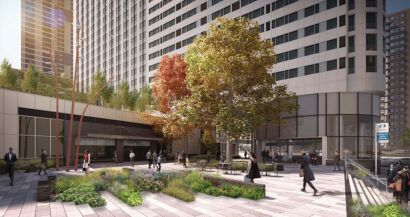 A rendering of the pedestrian plaza slated for 70 and 90 Columbus Drive, two residential towers going up outside the Grove Street PATH station in Jersey City.

The city is expecting nearly 3,000 residential units to come online before the end of the year, while developers are expected to break ground on another 3,000 in the next 10 months.

The new additions will include a 950-foot condominium tower on Hudson Street that will be the tallest building in New Jersey, a 50-story high-rise outside the Grove Street PATH station and a 448-unit tower in Liberty Harbor North that will rise 44 stories.

And the changes aren’t only in the Downtown, where most of the new large-scale development has taken place for the last three decades. Hundreds of units are set to go online by the end of the year on Senate Place, just south of Canco Lofts, and at the Beacon.

Developers Eric and Paul Silverman have been building in Jersey City for over 30 years — before it was cool. The brothers’ new building, Charles and Co., a 99-unit Grove Street building with office and retail space, is opening this summer. Eric Silverman told The Jersey Journal the city’s newest boom is part of a global trend of more people choosing city living over suburbia.

More than that, he said, Jersey City is special.

“People have finally recognized that Jersey City has a lot of natural assets: good architecture, a good grid pattern, the multiple modes of transportation,” he said. “It has everything.”