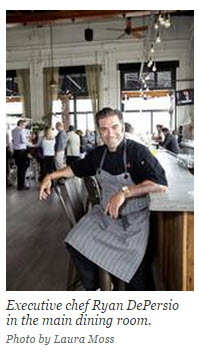 Executive chef Ryan DePersio has a lot riding on the success of Battello. While Fascino, his family’s Montclair BYO—a fixture on NJM’s annual Top 25—will always be “my baby,” as he recently said, Battello represents something he’s long been searching for: a large restaurant with a liquor license in a stunning location. If Battello succeeds, DePersio, 36, will have fulfilled that surging ambition.

DePersio was recruited by fellow Jerseyan Cory Checket, owner of Hoboken’s Turtle Club. Battello opened in March in the Newport Marina on Jersey City’s Hudson River waterfront. The sprawling, high-ceilinged structure that had been Michael Anthony’s faces the towers of Lower Manhattan. As redesigned by Jerseyan Anthony Carrino, co-host of HGTV’s Kitchen Cousins and Cousins Undercover, the 175-seat space looks more maritime. A weathered rowboat hangs upside down above the entrance. Brass lanterns salvaged from an old yacht are mounted on the walls. Stripped of paint, the ceiling trusses high overhead suggest the hull of a sailing ship.

At Fascino, DePersio developed an eclectic style he calls “Italian without borders.” You can find a few of its greatest hits here, including his ethereal ricotta gnocchi with sweet sausage Bolognese—a first-ballot lock for the Jersey Food Hall of Fame, if there were one. DePersio, who also oversees Nico at NJPAC in Newark, is ably assisted by chef de cuisine David Viana, formerly of Daryl in New Brunswick, and pastry chef Joseph Gabriel, whose handiwork we admired at the Pluckemin Inn in Bedminster.