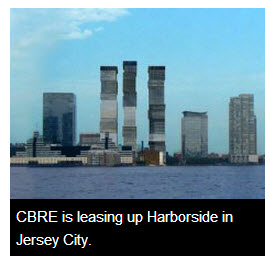 JERSEY CITY—CBRE is now the leasing firm for the office and retail portions of Harborside, a major Mack-Cali Realty Corp.mixed-use development on the Hudson River. Though just announced as the commercial real estate firm heading up the efforts to draw those types of tenants, Mark Ravesloot, vice chairman at CBRE, tells GlobeSt.com that we should be hearing some news by the end of the year about the companies inking deals.

The possibilities for tenants that will go into the project include tech, media and advertising companies that are getting “priced out” of Manhattan’s Midtown South area, he says. There are also opportunities for a high-end grocery store.

The development, similar to the Williamsburg waterfront in Brooklyn, will also have a built-in residential component of what are called micro apartments, which average about 500 square feet with large areas of common space that will include outdoor roof-deck areas, swimming pools, cafes and other types of gathering areas.