There’s encouraging news out today regarding the rebound of the nation’s housing market.

According to the Federal Housing Finance Agency, US house prices jumped 1.8 percent in the second quarter from the previous three months, fueled by record-low mortgage rates and tight inventory, reports Bloomberg News. 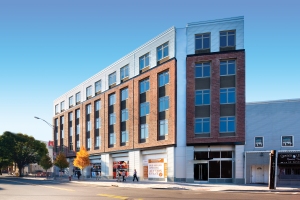 The Saffron, a condominium building by Fields Development Group on Newark Ave., has been a popular choice for Jersey City homebuyers.

Bloomberg News also reports on the sales of new US homes which increased more than projected in July to match a two-year high, a sign the industry that helped trigger the recession is recovering.  Sales climbed 3.6 percent to a 372,000 annual pace, following a 359,000 rate in June that was higher than previously estimated, figures from the Commerce Department showed today in Washington.  Full Story from Bloomberg News.