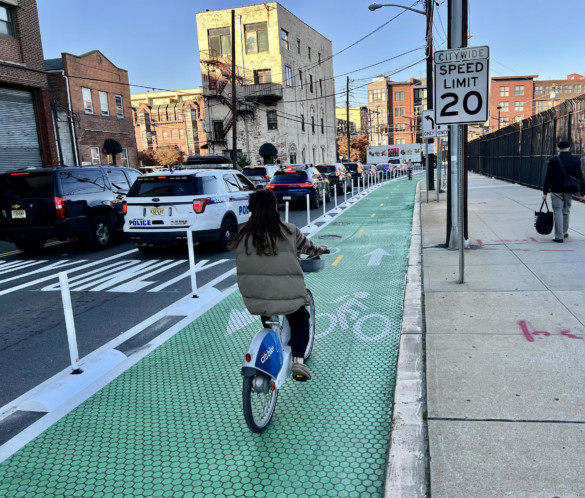 It’s no secret that Hoboken + Jersey City both have a lot of traffic, which can increase the likelihood of accidents — not to mention the inconvenience it poses. Hoboken + Jersey City have been working on a series of initiatives as part of the Vision Zero Action Plan to eliminate all traffic-related deaths by the year 2030 and make safer streets for everyone. So far, this has included changes in Hoboken like lowering the city-wide speed limit from 25 mph to 20 mph, which went into effect in September. In an effort to decrease traffic and increase safety, the latest collaborative effort between the two cities is a new protected bike lane running along Marin Boulevard and Henderson Street, connecting 18th Street in Jersey City to Observer Highway in Hoboken. Mayors Ravi Bhalla and Steven Fulop announced this week that this bike lane has officially been completed — and it includes a high-visibility traffic separator curb, flexible bollards, and Endurablend surface to provide high visibility and traction for bikers. Read on to learn about the brand new protected bike lane connecting Hoboken + Jersey City.