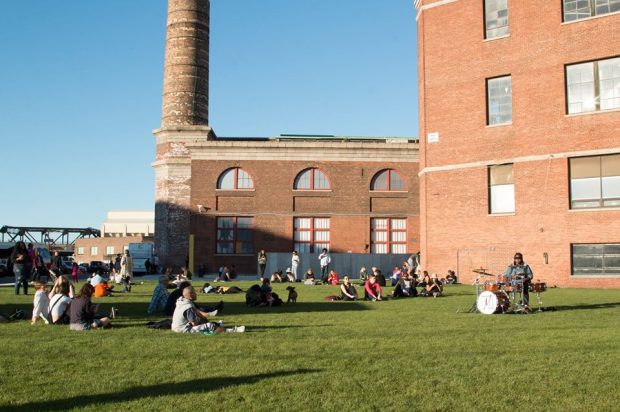 FREE AND OPEN TO THE PUBLIC, RSVP HERE: manacontemporary.com/openhouse

6PM–12AM, MANA BSMT GALLERY
DJ sessions and a performance by You Bred Raptors?, a three-piece instrumental busking band from New York with an experimental, filmic sound.

Ayn Foundation presents: “John Chamberlain: Photographs”
A selection of panoramic photographs taken by the renowned sculptor with a Widelux camera

Also on long-term display is “One Man’s Family” (1984), one of the artist’s signature crushed-metal sculptures.

Ayn Foundation presents: Arnulf Rainer: “Crosses and Angels”
In this exhibition, Ayn Foundation presents 19 works from 1985–2000, a core selection of Rainer’s cross and angel paintings. Beginning in the 1950s, Rainer was drawn to the feelings and states that accompanied religious devotion and practice. He approached the subject from theological, art-historical, and personal viewpoints, aiming to re-contextualize these powerful symbols.

Ayn Foundation presents: Fred Sandback Sculpture
A selection of works dating from 1967–82 presented by the Ayn Foundation, incorporating a series of early corner sculptures in metal rod and elastic cord, plus later acrylic yarn works determined by their architectural surroundings.

Ayn Foundation, in collaboration with Dasmaximum KunstGegenwart, presents: Andy Warhol: “The Original Silkscreens”
A collection of original silkscreen prints by the legendary artist, showcasing his expert use of color, graphic skill, and innovative printing techniques.

Dan Flavin: “cornered fluorescent light”
A large-scale installation by the Minimalist master that fills the space of one of Mana’s galleries with radiant color. First shown at the Institute for the Arts at Rice University in Houston, Texas, in 1972, the work appears at Mana courtesy of the Estate of Dan Flavin.

“Flat Out: Works on Paper, 1960–2000”
An exhibition curated by Ysabel Pinyol and Karline Moeller that explores the language of drawing as used by artists associated with Minimalism and Conceptualism in their founding years. Focused on drawing as a tool for planning work in three dimensions, Flat Out also explores its position as an element in creative narrative and a direct means of communicating artistic ideas. Artists featured include Jo Baer, Alighiero Boetti, Sol Lewitt, Walter de Maria, and Lauretta Vinciarelli.

“Juan Travieso: Liberated”
A new mural about the release of two critically endangered Malayan tigers, Nadia and Azul, into the wild. In this mural, the tigers roam the expansive jungle in which they belong.

PLEASE NOTE: The 33rd Street PATH train will be closed on weekends through the end of October 2018. The WTC line will continue unchanged. For alternative travel routes, which include shuttle buses and special weekend trains, visit the official PATH site.