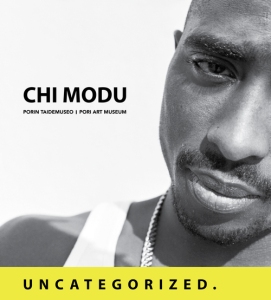 CHI MODU | UNCATEGORIZED A publication of the works displayed in both the NYC and Pori Art Museum Uncategorized Exhibitions in 2013/2014. Back in August of 2013, massive images by Chi Modu, best known for his iconic photos of major hip hop artists, began appearing on the exterior walls of select NYC buildings, as part of an ongoing outdoor art installation called Uncategorized. In the summer of 2014, the exhibition was brought to the Pori Art Museum in Finland and occupied the 800 square meter main hall for the summer exhibition season. This book is a compilation of photos from both exhibits.

Uncategorized represented a way for Modu to make his art accessible to more people. According to Modu, “The art world tends to be very exclusive and full of obstacles for both the artists and the public. My goal is to make art more inclusive by pulling an end run on the galleries and the museums, breaking down the barriers, and bringing the art directly to the people. Like graffiti, but legal.” As to why he calls the exhibit Uncategorized — “People always want to put art and artists into neat little boxes. My work does not fit into any one stereotype and neither do I. I want to create something that is the opposite of putting labels on everything and make a statement against stereotyping in general. I don’t see this as just an exhibition. I want to start a movement.” Along with iconic hip hop images, the publication also includes photos from Modu’s numerous journeys around the world. With his photographs, Chi wishes to focus our attention on what we have in common as opposed to what divides us. Chi’s hope is that via his images, he is able to show how we are all cut from the same cloth.

Chi first picked up a camera while a student at Rutgers University. After honing his skills at the International Center of Photography, he landed a job at The Source, which was the definitive magazine of hip hop culture. It was there that Chi developed relationships with the biggest icons of the hip hop movement, most of whom were not yet famous. In addition to shooting over 30 cover photos for The Source as their Director of Photography, Chi was able to capture the musicians in candid, unexpected moments, due to his disarming manner and unique perspective. His photos include some of the most groundbreaking, memorable images of that era, including Tupac Smoking and Biggie WTC (standing in from of the World Trade Towers). He not only chronicled and defined the most important phase of the hip hop movement, now a global force, he also was able to define the artists and show them as real people, rather than one-dimensional celebrities.     – from press release

Check out more on the book HERE