The Golden Door International Film Festival kicks off on Thursday October 10th with an Opening Celebration at the Landmark Loew’s Jersey Theater.

Golden Door FIlm Festival is a not-for-profit organization with strong ties to the Jersey City community. Their  mission is to offer a platform for independent filmmakers and to bring these great independent films to the area. They believe that by providing a source of new and innovative entertainment they can bring the community closer together while at the same time giving artists the chance to shine.

This year’s selection of films includes Jersey City FYI favorite PEARL! The film will be screened on Sunday, October 13th at 2:30 PM at the Landmark Loew’s Jersey Theater. Click HERE for tickets. 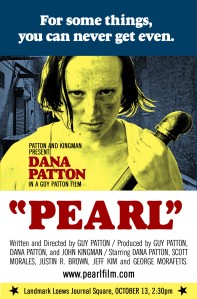 Consumed by a horrific event in her past, a woman is driven to violent retribution, and soon discovers that there can be no getting even. Her only ally: a meth-making genius who manipulates her for his own ends while she wages a vigilante campaign against a powerful drug lord and his thug army. A detective, investigating a series of grisly homicides, begins to uncover the truth about her, and the role he himself played in her origins. But can he find her in time to stop the killing, and to save her from herself?

Written and directed by longtime Jersey City resident Guy Patton and starring Dana Patton, PEARL was produced by the Pattons and John Kingman and was shot primarily in Jersey City locations.

Check out all the great films this year!

Repost: @trompeterrealestate Hopping on this trend for #jerseycity 😍 We Love living in Jersey City, How about you?
Pro Arts Jersey City has announced its inaugural exhibition in their first gallery in 26 years - The Empowering: a social justice show. Link in bio for the full details!
❗️Coming soon: Historic Downtown Jersey City’s Winter and Spring Farmers Market❗️
×
Loading Comments...
Comment
×
%d bloggers like this: